Are you fascinated by the idea of rooting your new Droid X but scared to get involved with the sometimes-convoluted process? Put your fears aside and check out the Windows-based app which roots (and unroots) your phone with one button. Although the concept is rather different from methods past, we're hearing it works well. According to the developer, we can also look for apps down the road which can install applications, remove bloatware, or back up apps.

You May Also Enjoy...

Qubrit is a fast growing social network which allows you to create your virtual business card and exchange it with friends, colleagues and others. The most important feature of Qubrit, is that you will always keep the contact details of others updated. People tend to change their phones, emails, addresses, and even close down their social network profiles (like recent examples of Facebook accounts closures).

Qubrit’s main feature is that you have business cards of others, which will always be up to date, with the most curets contact information, suck as mobile, phone, email, address, skype, facebook, linkenin, twitter profile links. Once a person amends his business card information, everyone who have his virtual business card will see his most up-to-date info.

Human LCD : Close Up Video: "
High school students cheering for their soccer teams. The most amazing thing is that they do this with their CLOTHES (not holding up cards). they have a jacket that is one color on the back, one on the front, and that they can open or close to show a third color shirt on the inside. Awesome.

Picasa Web Integrates with Picnik: "Picasa Web Albums added an option that lets you edit photos in Picnik, the online photo editor acquired by Google in March. After clicking on the 'Edit' button, Picasa Web Albums uploads the photo to Picnik and opens Picnik in a pop-up box.

Picnik is still a Flash application and it doesn't load quickly, so you have to wait at least 10 seconds until you can use it. The online photo editor doesn't have all the features that are available in Picasa, but there's an useful 'auto-fix' option similar to the 'I'm feeling lucky' button from Picasa, you can crop photos, repair red-eye flaws, remove color casts automatically and fix exposure. 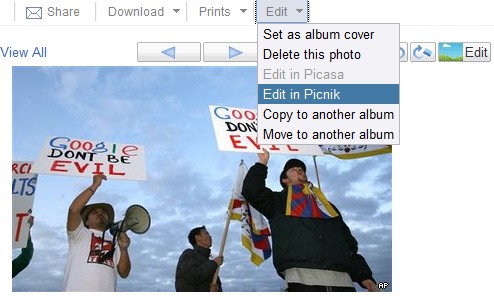 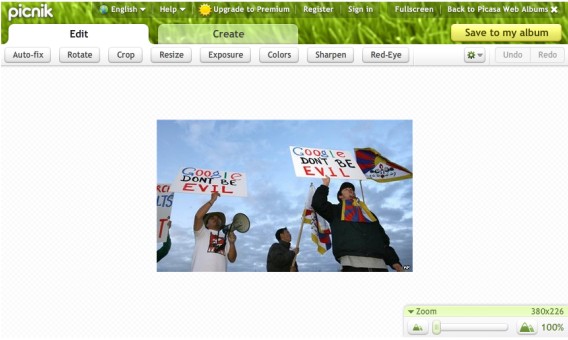 The nice thing is that you no longer have to sign in to Picnik and that the changes can be saved to Picasa Web Albums after you click 'save to my album', but that's nothing new. Flickr has been offering a similar feature since 2007.

'Picnik's rich editing tools are now integrated into Picasa Web Albums allowing you to experience them without ever having to leave your account. As long as you're using Picasa in one of the Picnik supported languages, just click 'edit' from the edit drop down menu or from the new handy Picnik icon. Then, Picnik away by applying an effect, adding a sticker, or exploring your own creative path with advanced tools. When you are done editing your photo, save back to your album by either replacing the existing image or making a new copy,' suggests Google.

I expect that Picnik will be rewritten as an HTML5 application, so that it can have a better performance and properly integrate with Picasa Web Albums. Instead of opening the editor in separate box, Picasa Web Albums should let you edit the photo in place.

{ Thanks, Sterling and Niranjan. }

Microsoft is going to release the Facebook social connector for Outlook later today according to Neowin. The connector allows you to integrate your Facebook contacts into Outlook to view things like their status updates. It’s a good way to keep in touch with people, though businesses might find the concept irritating.

Many people were expecting this to have been released with the new Office 2010 suite recently but news soon came that it might be some time before it was released.

The Connector provides a stream of information from SharePoint, Windows Live and Social networking sites. The connector is built into Outlook 2010 but will be available to download as a plug-in for Outlook 2003 and 2007.

The forthcoming version of Windows Live Messenger will also feature social networking integration and this is a tool that can prove useful in the business space if utilised properly.

The Outlook Social Connector (OSC) should be available for download later today.

UPDATE : You can now download the Outlook Social Connector HERE.